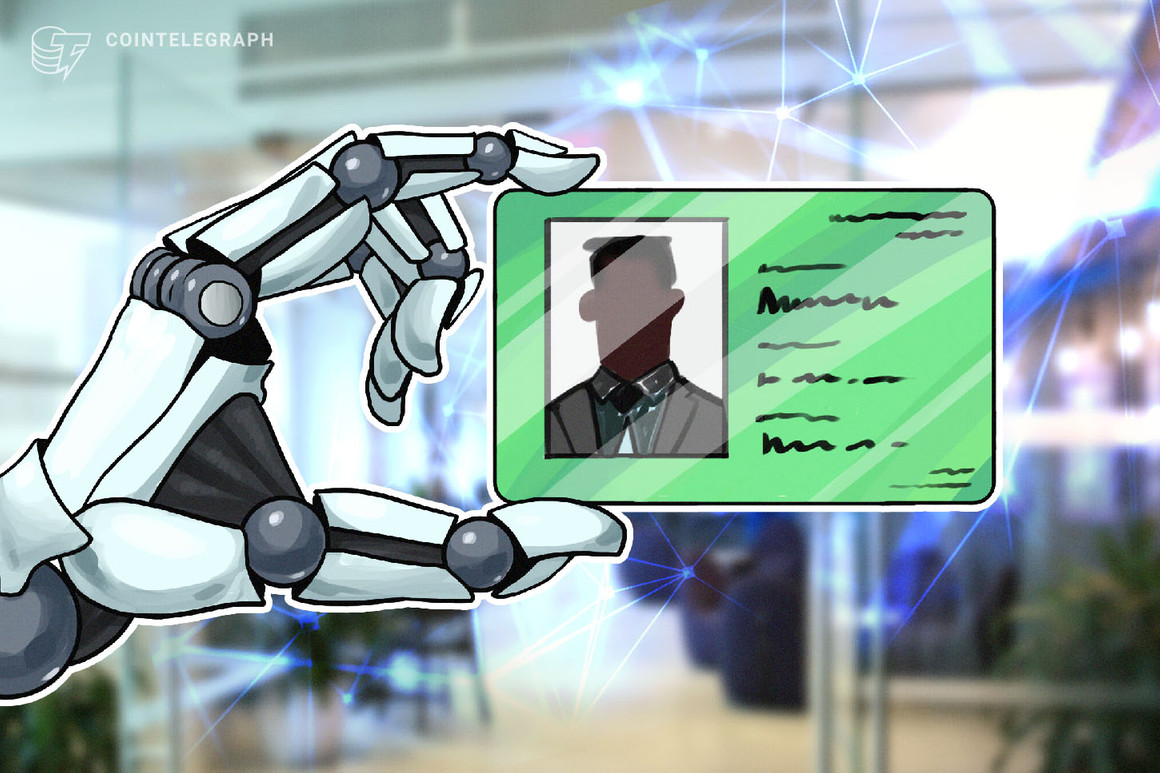 The attention, one might suspect, has much to do with the participation of Buterin, blockchain’s wunderkind and the legendary co-founder of the Ethereum network. But it could also be a function of the paper’s ambition and scope, which includes asking questions like: What sort of society do we really want to live in? One that is finance-based or trust-based?

The authors illustrate how “non-transferable ‘soulbound’ tokens (SBTs) representing the commitments, credentials and affiliations of ‘Souls’ can encode the trust networks of the real economy to establish provenance and reputation.” These SBTs appear to be something like blockchain-based curricula vitae, or CVs, while “Souls” are basically people — or strictly speaking, individuals’ crypto wallets. However, Souls can also be institutions, like Columbia University or the Ethereum Foundation. The authors wrote:

There is no shortage of visionary scenarios about how Web3 might unfold, but one of the latest, “Decentralized Society: Finding Web3’s Soul” — a paper published in mid-May by E. Glen Weyl, Puja Ohlhaver and Vitalik Buterin — is close to becoming one of the top 50 most downloaded papers on the SSRN scholarly research platform.

“Imagine a world where most participants have Souls that store SBTs corresponding to a series of affiliations, memberships, and credentials. For example, a person might have a Soul that stores SBTs representing educational credentials, employment history, or hashes of their writings or works of art.”

“In their simplest form, these SBTs can be ‘self-certified,’” continue the authors, “similar to how we share information about ourselves in our CVs.” But this is just scratching the surface of possibilities:

There’s a lot to digest in the 36-page paper, which sometimes seems a hodgepodge of disparate ideas and solutions ranging from recovering private keys to anarcho-capitalism. But it has received praise, even from critics, for describing a decentralized society that isn’t mainly focused on hyperfinancializaton but rather “encoding social relationships of trust.”

“Vitalik standing up and saying NFTs [nonfungible tokens] are a bad idea for identity is a great thing. Also, the publicity for use cases like university degrees and certifications is fantastic, as SSI has been terrible at marketing itself.”

Similarly, the paper’s attention to issues like loans being overcollateralized due to lack of usable credit ratings “is excellent,” he added.

Overall, the reaction from the crypto community, in particular, has been quite positive, co-author Weyl told Cointelegraph. Weyl, an economist with RadicalxChange, provided the core ideas for the paper, Ohlhaver did most of the writing, and Buterin edited the text and also wrote the cryptography section, he explained.

According to Weyl, the only real sustained pushback against the paper came from the DID/VC (decentralized identifiers and verifiable credentials) community, a subset of the self-sovereign identity movement that has been working on blockchain-based, decentralized credentials for some years now, including ideas like peer-to-peer credentials.

A “lack of understanding”?

Still, the visionary work garnered some criticism from media outlets such as the Financial Times, which called it a “whimsical paper.” Some also worried that SBTs, given their potentially public, non-transferable qualities, could give rise to a Chinese-government-style “social credit system.” Others took shots at co-author Buterin personally, criticizing his “lack of understanding of the real world.”

Crypto skeptic and author David Gerard went even further, declaring, “Even if any of this could actually work, it’d be the worst idea ever. What Buterin wants to implement here is a binding permanent record on all people, on the blockchain.”

Others noted that many of the projected SBT use cases — such as establishing provenance, unlocking lending markets through reputation, measuring decentralization or enabling decentralized key management — are already being done in different areas today. SBTs are “potentially useful,” said Edwards, “but I have yet to see a use case where they beat existing technologies.”

Cointelegraph asked Kim Hamilton Duffy, who was interviewed two years ago for a story on decentralized digital credentials, about some of the use cases proposed in the “Soul” paper. How do they compare, if at all, with the work she has been doing around digital credentials?

“It is similar to my thinking and approach when I first started exploring blockchain-anchored identity claims with Blockcerts,” Duffy, now director of identity and standards at the Centre Consortium, told Cointelegraph. “The risks and, correspondingly, initial use cases I carved out — restricting to identity claims you’re comfortable being publicly available forever — were therefore similar.”

While the Soul paper touches on potential approaches to risks and challenges — such as how to handle sensitive data, how to address challenges with key and account recovery, etc. — “These solutions are harder than they may initially appear. What I found was that these problems required better primitives: VCs and DIDs.”

Weyl, for his part, said there was no intent to claim priority with regard to the proposed use cases; rather, it was merely to show the power of such technologies. That is, the paper is less a manifesto and more a research agenda. He and his colleagues are happy to pass credit around where credit is due. “The VC community has an important role to play,” as do other technologies, he told Cointelegraph.

A question of trustworthiness

But implementation may not be so simple. Asked to comment on the practicality of an enterprise like “soulbound tokens,” Joshua Ellul, associate professor and director of the Centre for Distributed Ledger Technologies at the University of Malta, told Cointelegraph: “The main issues are not technological but, like many aspects in this domain, issues of trust.”

Assume a university is a “Soul” that issues students blockchain-based certificates. “People may trust the attestation because they trust the centralized university that makes its public key public,” Ellul said. But then others might ask, “What is the point of storing SBTs on a DLT when the university keeps such control?”

Or looking at the idea of peer-to-peer work credentials, “In the real world, would a company honor a peer-to-peer credential issued by an individual or institution unknown to the company? Or would they rather just rely on traditional credentials?”

It’s a matter of “shifting the mentality of trust” from centralized institutional trust to trusting networks, Ellul told Cointelegraph — and that could take some time to achieve.

Assume a university is a “Soul” that issues students blockchain-based certificates. “People may trust the attestation because they trust the centralized university that makes its public key public,” Ellul said. But then others might ask, “What is the point of storing SBTs on a DLT when the university keeps such control?”

Or looking at the idea of peer-to-peer work credentials, “In the real world, would a company honor a peer-to-peer credential issued by an individual or institution unknown to the company? Or would they rather just rely on traditional credentials?”

It’s a matter of “shifting the mentality of trust” from centralized institutional trust to trusting networks, Ellul told Cointelegraph — and that could take some time to achieve.

What if you lose your private key?

The paper presents several use cases in areas where very little work has been done until now, Weyl told Cointelegraph. One is community recovery of private keys. The paper asks the question of what happens if one loses their Soul — i.e., if they lose their private key. The authors present a recovery method that relies on a person’s trusted relationships — that is, a community recovery model.

With such a model, “recovering a Soul’s private keys would require a member from a qualified majority of a (random subset of) Soul’s communities to consent.” These consenting communities could be issuers of certificates (e.g., universities), recently attended offline events, the last 20 people you took a picture with, or DAOs you participate in, among others, according to the paper.

The paper also discusses new ways to think about property. According to the authors, “The future of property innovation is unlikely to build on wholly transferable private property.” Instead, they discuss decomposing property rights, like permissioning access to privately or publicly controlled resources such as homes, cars, museums or parks.

SBTs could grant access rights to a park or even a private backyard that are conditional and nontransferable. For example, I may trust you to enter my backyard and use it recreationally, but “that does not imply that I trust you to sub-license that permission to someone else,” notes the paper. Such a condition can be easily coded into an SBT but not an NFT, which is transferable by its very nature.

Inevitably, speculation is settling on Buterin’s motivation for attaching his name and prestige to such a paper. Some media outlets suggested the Ethereum founder was overreaching or looking for the next big thing to spur a market rally, but “This doesn’t fit Vitalik’s typical approach,” noted Edwards.

Buterin’s motivation may be as simple as looking for another way to maintain and build Ethereum’s platform dominance. Or, perhaps more likely, the impetus “could be a backlash against the speculation and fraud with NFTs and looking to repurpose them into a technology that changes the world in a positive way,” Edwards told Cointelegraph.

In any event, the Soul paper shedding light on decentralized society, or DeSoc, performs a positive service in the view of Edwards and others, even if SBTs themselves eventually prove to be nonstarters. In the real world, one often doesn’t need an all-encompassing, perfect solution, just an improvement over what already exists, which today is centralized control of one’s data and online identity. Or, as the paper’s authors write:

“DeSoc does not need to be perfect to pass the test of being acceptably non-dystopian; to be a paradigm worth exploring it merely needs to be better than the available alternatives.”